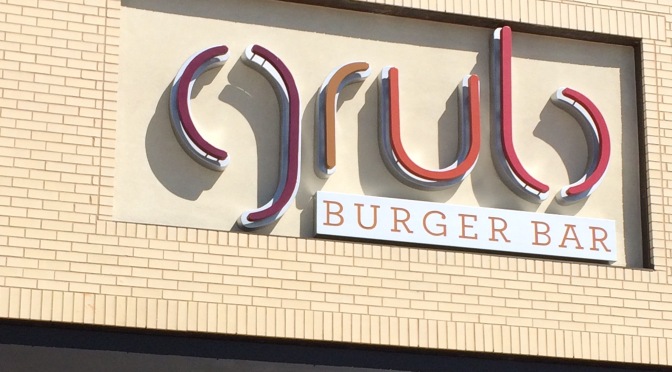 I always get excited to eat burgers. Not all burgers, though.  I’ll wrestle with a couple of McDoubles now and then, but when I have an opportunity to enjoy something remarkable, I’ll sometimes feel those butterflies of excitement in the pit of my belly.  Or it might be a McDouble returning with its greasy wrath.

I brought my daughter Zoe’ on a lunch date and we ventured into Grub Burger Bar.  It’s only been here about a month and I’ve heard mixed reviews.  It was time I brought my eleven year old burger expert to investigate.

I knew I was in for a treat when I saw a guy making the rolls from scratch, (These fresh rolls are better than Mooyah‘s), but I still couldn’t shake the mediocre review the the lady who insisted on talking as she cut my hair a couple of weeks ago.  Then again, hairdressers don’t have palates.  They have scissors. 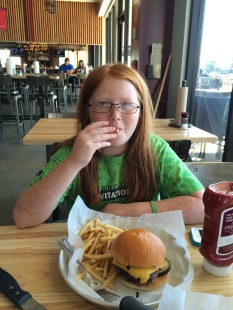 Zoe’ sampling a fry before she goes in for the kill. 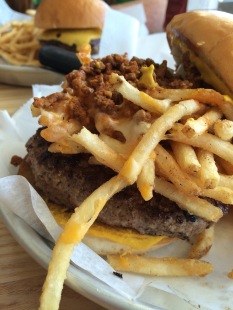 This monstrosity is called the OMG. I prefer to call it the angry burger smothered in fries and chili.

The meat was fantastically juicy and nicely seasoned–a stark contrast to the over salted shoe leather I consumed the last time I ate at Twisted Root.  I’m not saying Twisted Root is trash, I’m saying that the last time I was there it was nightmarishly mediocre that I’m not sure I can return to take a risk on returning because their prices are already sky high.  All I’m saying is that if I’m going to spend my kid’s college money on a burger, it better be good.

All in all, it was great and I know that because my redheaded burger critic loved it.  She just wished that it could have come with Five Guys’ fries. 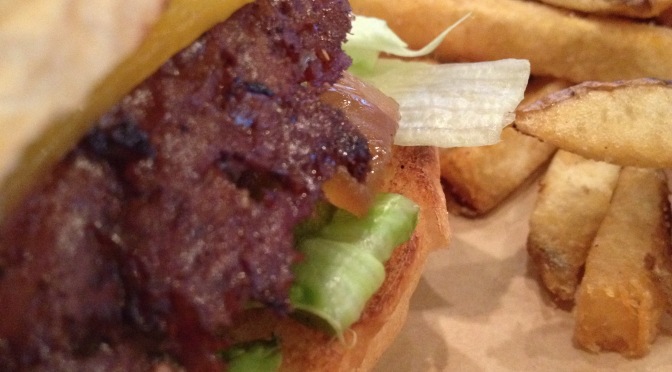 I was on my way home from a Mercy Chefs deployment in Van, TX and had planned on stopping at Stanley’s in Tyler, TX.  They have excellent barbecue.  In fact, I’d say they have the only barbecue in fifty miles.  All other claimants in the area do not produce barbecue, but an abominable imposter.  Sadly, Stanley’s is closed on Sundays, so I had to think fast and settled on Mooyah Burgers, Shakes & Fries.  I won’t make that mistake again.

I was encouraged when I saw fresh cut fries on the menu.  I also thought the burgers looked promising.  I was thinking about Five Guys fries and a punched up burger as I consider five Guys’ burgers as consistent, yet average.  If I hadn’t shelled out eleven bucks for a burger, fries, and a drink, I could have better enjoyed an otherwise unenjoyable burger.

The bun was soft and squishy like an old lady’s flabby neck (I mean this in the most complimentary way).  The size of the party was impressive.  The sheer number of available toppings and sauces were unmatched.  The flowing grease mustn’t be confused with juiciness, though.

At first, I actually thought I was assaulting an incredibly juicy burger, but the unpleasant liveresque aftertaste coupled with grease that coated my throat, I quickly realized that I had stumbled into a nightmare.  I’m not opposed to excessively greasy burgers, but this was no enhancement.  This was obscenity on a bun.  This was equivalent to grazing on a minefield of back acne.

If you want some tasty fries, Mooyah will satisfy.  If you are still lusting for decadence, pass on the burger and get a peanut butter and banana concrete at Andy’s Frozen Custard down the street.